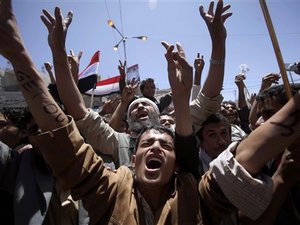 "The death toll has gone up to 15," said Sadeq al-Shujaa, head of a makeshift field hospital at a square in central Taez, updating an earlier casualty toll.

The bloodshed came as demonstrators staged a march on the governorate headquarters in the city about 200 kilometers from the capital to demand the ouster of Yemen's embattled President Ali Abdullah Saleh.

Witnesses said the demonstrators stormed the courtyard of the governorate and that plainclothes gunmen opened fire in an attempt to push them back.

The bloodshed, a day after another protester was shot dead in Taez, sent the death toll to more than 100 in a crackdown on protests in the impoverished Arabian Peninsula state since late January.

In a similar confrontation, 13 people were shot and wounded late on Sunday as police clashed with tens of thousands of demonstrators in the western city of Hudaydah, according to witnesses.

Police opened fire as the protesters marched on to the Red City Sea’s main local government building, the witnesses said.

Thirteen were wounded by live bullets, another 30 by batons and pebbles, while 400 others suffered from the effects of tear gas inhalation, according to the witness account.

The demonstrations in Taez and Hudaydah, 150 kilometers from Sanaa, form part of a renewed spurt of protests for Saleh to end his three-decade rule.

The opposition Common Forum on Saturday called on Saleh to hand power to Vice President Abdrabuh Mansur Hadi in a new "vision for a peaceful and secure transition of power."

But the embattled president, a key U.S. ally in Washington's war on al-Qaida, told the opposition to end protests and remove roadblocks, offering a "peaceful transition of power through constitutional ways."

Youth protesters staging sit-in protests, however, said they would accept nothing short of an end to Saleh's autocratic rule along with the departure of top figures in his regime.

According to a report in the New York Times on Sunday, citing U.S. and Yemeni officials, the U.S. government is dropping its support for Saleh and taking part in efforts to negotiate his departure and a transitional handover.

U.S. officials have told allies they see Saleh's position as untenable due to the widespread protests, and believe he should leave office, the paper said, adding that negotiations over his departure began more than a week ago.

Oil-rich Gulf states also said on Sunday they were seeking to mediate between Saleh and the opposition.

The tide appeared to turn against Saleh on March 18 when regime loyalists gunned down 52 demonstrators in Sanaa, sparking widespread condemnation abroad and a string of defections from the president's camp.

But boosted by two huge pro-regime rallies in the capital and U.S. statements on the anti-Qaida battle of Yemen under the leadership of its ally Saleh have produced shows of defiance by the president.