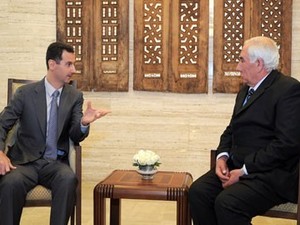 A new governor has been sworn in for a Syrian province that has become the epicenter for the country's anti-government protests.

The state-run news agency SANA says Mohammed Khaled Hannous was sworn in as governor of Daraa on Monday.

President Bashar Assad presided over the ceremony in the capital, Damascus.

Assad has made a series of gestures toward reform in response to the growing cries for change in one of the most authoritarian regimes in the Middle East. Among them was firing the previous governor of Daraa, an impoverished southern province where the protest movement began nearly three weeks ago.

At least 80 people have been killed as the government cracked down protests around the country.