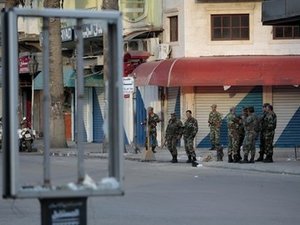 The commission charged with replacing Syria's emergency law with new legislation will conclude its work by Friday, a newspaper close to the government reported.

"Sources within the commission tasked with studying the removal of the emergency law said it will, by Friday, finish formulating the necessary legislation to replace the emergency law," the Al-Watan newspaper said Monday.

Lifting Syria's emergency law, in place since the end of 1962, has been a central demand of protesters in their three weeks of pro-reform rallies held across the country.

Al-Watan said the commission's work is inspired by the "experience and legal frameworks of the United States, the United Kingdom and France, while taking into account both the dignity and safety of all citizens".

"Its conclusions will be publicly discussed and the commission will listen to all views before the government passes the proposed legislation."

The newspaper report was not officially confirmed.

President Bashar al-Assad had set April 25 as the deadline for the judicial commission to complete the task of drafting the new legislation to replace the emergency law.

The law, which paved the way for the ruling Baath party to declare a state of emergency when it took power in 1963, imposes restrictions on public gatherings and movements.

The law also authorizes interrogation of any individual and surveillance of personal communication as well as official control of the content of newspapers and other media before publication.

For its part, opposition’s mouthpiece Sham News Network said “more than 100 people were arrested yesterday (Sunday) in the Homs town of Talbiseh.”