Libya Says Open to Reforms, But Gadhafi Must Stay 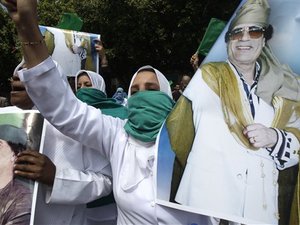 The Libyan government said Tuesday it was ready to negotiate reforms, but refused any talk of Moammar Gadhafi stepping down saying he was a unifying figure after ruling the nation for four decades.

"What kind of political system is implemented in the country? This is negotiable, we can talk about it," government spokesman Moussa Ibrahim told journalists. "We can have anything, elections, and referendums."

But Gadhafi's future was non-negotiable, he stressed, only hours after opposition rebels flatly rejected a reported peace deal that could see the embattled leader's son take charge of the north African nation.

Gadhafi was "the safety valve" for the unity of the country's tribes and people, Ibrahim said. "We think he is very important to lead any transition to a democratic and transparent model."

The comments came as a Gadhafi envoy held talks in Turkey and Malta amid U.S. media reports that two of the leader's sons were offering to oversee a transition to democracy that would include his removal from power.

But Italy, Libya's former colonial master, dismissed the diplomatic overtures as not credible, as fierce fighting continued and rebel fighters launched a new attempt to recapture the oil refinery town of Brega.

He also dismissed proposals by Libya's Deputy Foreign Minister Abdelati Laabidi, which have not been made public, as "not credible", adding: "It is not possible to accept them."

His son Saif al-Islam, long seen as the successor to his father before the wave of protests in the North African country, also briefly showed up at a Tripoli hotel where journalists are staying giving an interview to the BBC.

Saif had not been seen in public since coalition air strikes on March 19.

Gadhafi's regime was "looking for a solution," Athens said, as Laabidi then travelled to Malta for discussions on the seven-week conflict.

But the rebels swiftly rejected any deal involving the Gadhafi family.

"Gadhafi and his sons have to leave before any diplomatic negotiations can take place," Transitional National Council spokesman Shamseddin Abdulmelah told Agence France Presse, adding the regime had lost any right to talk of a negotiated exit after it continued to pound Misrata, 214 kilometers east of Tripoli.

Ahead of a meeting next week in the Qatari capital Doha of the international contact group on Libya, Italy announced it was joining France and Qatar in recognizing the TNC, and said it would send ships and planes to evacuate the wounded from Misrata.

But the U.S. military on Monday withdrew its fighter jets from the international air campaign, after keeping them in the air for another 48 hours at NATO's request.

After that, "U.S. aviation assets are expected to cease strike sorties and will remain on an alert status if NATO requests their support," James said.

A Turkish aid ship which arrived in Benghazi on Sunday carrying more than 250 patients from Misrata left early on Monday for the Turkish port of Cesme.

Koussa's assets were frozen last month as part of a U.S. and allied campaign to pile pressure on the Libyan leader and his closest advisers.

"Koussa has since severed ties with the Gadhafi regime, and today the United States is lifting sanctions against him," the Treasury Department said.

Britain said it was not pursuing "an exit strategy for Gadhafi," but a "genuine ceasefire."