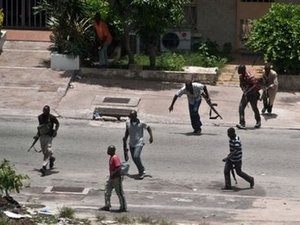 The Higher Defense Council is scheduled to hold an extraordinary meeting at Baabda palace under President Michel Suleiman at 1:30 pm Tuesday to discuss ways at finding a safe exit for Lebanese expatriates in violence-torn Ivory Coast.

The meeting is rare since it comes at a time of a political vacuum and in the absence of a Lebanese government.

Lebanon’s ambassador to the Ivory Coast, Ali Ajami, told As Safir daily that the number of Lebanese who have taken refuge at camps of French and Jordanian troops has reached 1,500.

The newspaper said that around 7,000 of the 70,000 Lebanese residing in Abidjan have registered themselves on evacuation lists and are waiting for assistance to leave the country.

Ajami lamented that the Lebanese community in the African country has suffered economic losses of billions of dollars.

French ambassador Denis Pietton was also quoted as saying that French troops were only bringing stranded Lebanese into their camps. “Those who want to leave, should do so based on their own will.”