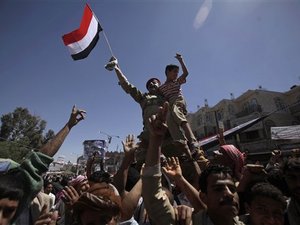 Thousands of protesters took to the street in the Red Sea city denouncing the killing of 17 anti-regime protesters Monday in the city of Taez, 200 kilometers south of the capital Sanaa.

An official cited by Saba state news agency confirmed the death of two protesters in Hudaydah.

Yemeni security forces opened fire on demonstrators in Taez demanding the departure of President Ali Abdullah Saleh as they marched on the governorate headquarters.

Witnesses said the demonstrators stormed the courtyard of Taez's governorate and that plainclothes gunmen and rooftop snipers also took part in the gunfire to push them back.

The bloodshed, a day after another protester was shot dead in Taez, sent the death toll to more than 100 in a crackdown on protests in the south Arabian Peninsula since late January.

The White House has warned that al-Qaida could take advantage of a power vacuum in Yemen and pushed for a transfer of authority by Saleh, its key anti-terror ally.

The opposition has called on Saleh to hand power to his vice president, who would be a caretaker president.

But the president, who has adopted a defiant tone over the past week, on Sunday told the opposition to end protests and remove roadblocks, offering a "peaceful transition of power through constitutional ways".

Oil-rich Gulf states said they are seeking to mediate between Saleh and the opposition.