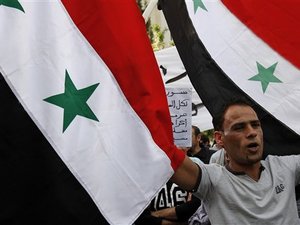 Syria was on Tuesday braced for the start of "Martyrs Week", a series of rallies organized by a Facebook group in honor of those killed in security clampdowns on pro-reform demonstrations.

"The Week of the Martyrs will be a thorn in the regime's side," the organizers of Facebook group Syrian Revolution 2011 said, designating Tuesday as the first day of protests focused on coastal towns "far from the capital".

Activists estimate more than 130 people have been killed in clashes with security forces, mainly in Daraa and the port city of Latakia, since political unrest erupted March 15.

Officials have put the death toll at closer to 30, blaming the violence on "armed" groups and foreign interference seeking to divide a country that has long prided itself on the co-existence of different religions and ethnic groups.

"We announced (the protests) as peaceful and insist on that," said Syrian Revolution 2011, which has garnered more than 100,000 supporters online and proved a persistent motor of anti-regime rallies.

President Bashar Assad, who is facing a domestic crisis unprecedented in 11 years of rule, has made a string of gestures hinting at change but has failed to appease protesters who are demanding greater freedom and political reforms.

A new governor was appointed on Monday to the Syrian protest hub of Daraa, where dozens died in protests marred by violence, while a newspaper said a commission probing fatalities in protest centers will wrap up its work by Friday.

Syrian authorities have also promised to lift the state of emergency without specifying when but the daily newspaper al-Watan, which is close to power, has said "new legislation" to replace emergency rule would be ready by Friday.

The Facebook group also called for a boycott of cell phone companies on Wednesday, a rally against the ruling Baath party on Thursday outside its Damascus headquarters, and countrywide demonstrations on Friday.