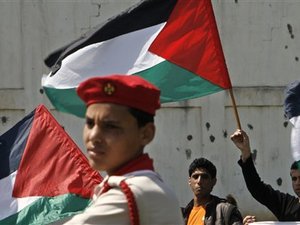 A Palestinian was killed by Israeli fire in northern Gaza on Tuesday, medical sources said, as Palestinian factions met to discuss tensions with Israel along the border.

"A Palestinian was killed by an Israeli tank shell near Erez," Adham Abu Selmiya told AFP, identifying him as 21-year-old Mohammed Ziyad Shalha.

Earlier, witnesses reported seeing Israeli troops firing at two men in the same area who were said to be collecting gravel, in what was understood to be the same incident.

At the time, Palestinian medics were not allowed into the area so were unable to confirm how many people were involved or how badly they had been hurt. It was not immediately clear if a second person was involved.

The Israeli army confirmed firing towards someone near the border fence but a spokeswoman mentioned only one person, who she said was armed and who had been hit by gunfire.

"The IDF identified an armed man near the security fence in the northern Gaza Strip and fired towards him," she said. "They identified a hit."

The area along the Gaza border has been declared a no-go zone by the Israeli military, which often fires on Palestinians who venture into the area for fear of attacks.

But locals often risk injury or death to enter the no-go zone in search of gravel which they can sell.

Meanwhile, Gaza's Hamas rulers were on Tuesday holding talks with the representatives of all the Palestinian factions to discuss "the situation on the ground", officials told Agence France Presse.

The meeting was called a day after a Gazan engineer, who was allegedly kidnapped by Israeli agents from Ukraine in February, was indicted for building rockets for Hamas militants.

Several days earlier, three Hamas militants were killed in an Israeli airstrike in what the army called a pre-emptive strike against a cell which was planning to kidnap Israelis from Sinai.

The move prompted vows of revenge, despite a fragile ceasefire on rocket attacks which has been declared by militant groups.