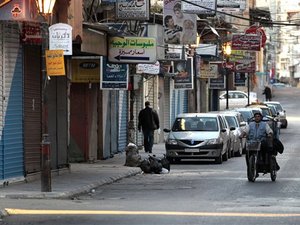 The southern Syrian town of Daraa, the center of pro-democracy protests, was hit by a general strike on Tuesday and braced for fresh rallies after midday prayers, a rights activist said.

"The general strike was largely observed," he told Agence France Presse on condition of anonymity, adding that activists had distributed leaflets urging shops to remain closed on Tuesday.

He added security forces fired warning shots on Monday night trying "in vain" to disperse a sit-in outside the Al-Omari mosque, the focal point of more than two weeks of anti-government protests marred by deadly violence.

The strike came a day after President Bashar Assad named Mohammad Khaled al-Hannous as the new governor of the town, one of the main flashpoints of an opposition movement that erupted on March 15.

He replaces the much-reviled Faysal Kalthum, sacked on March 23 at the height of protests calling for freedom and political reform that left the governor's residence in flames.

The move was dismissed as not enough by Syrian human rights activists because "the residents of Daraa want more than a switch in governor".

"They want the security services to stop oppressing them, the emergency law lifted, property rights respected, the detained freed and freedom of expression guaranteed," an activist told AFP.

Activists estimate more than 130 people have been killed in clashes with security forces, mainly in Daraa and the port city of Latakia, since the start of political unrest.

Officials have put the death toll at closer to 30 and blamed the violence on "armed" groups and foreign interference seeking to divide the ethnically and religiously diverse country.