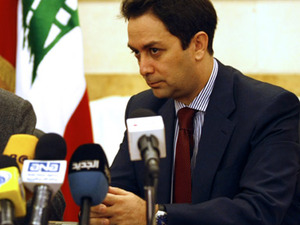 Caretaker Interior Minister Ziad Baroud on Tuesday criticized some parties for allegedly using the demands of inmates at Roumieh prison as instruments to achieve political objectives.

During a press conference he held after a meeting of the Central Security Council, Baroud said he was fully responsible for all issues linked to his post.

But he said the absence of a government and bureaucratic procedures were behind delays in the implementation of reforms on prisons.

Baroud admitted that the recent riots at the Roumieh central prison were the result of “negligence” but said his ministry had undertaken several measures to improve the conditions of prisons.

The caretaker minister told reporters that he called Speaker Nabih Berri during the meeting of the Central Security Council and urged him to meet one of the demands of the prisoners to grant them amnesty in some cases.

Berri promised Baroud to follow up a draft law on granting amnesty with conditions to some prisoners, he said.

Baroud reiterated that the ministry had plans to build more prisons in the north and south to let inmates become closer to their families and limit their numbers inside cells to ease overcrowding.

He unveiled that there are 3,700 inmates in Roumieh alone and sometimes numbers reach more than 4,000. Only 721 of them are convicted, Baroud said highlighting slow legal proceedings.

But the caretaker minister lauded Prosecutor Saeed Mirza for expressing readiness to speed up trials.

“We are keen on the safety of the prisoners and security forces have a plan to immediately end the mutiny” in Roumieh without causing casualties, he told reporters.

Baroud also promised to take disciplinary measures against officers who had collaborated with the inmates. He unveiled that several politicians were demanding the Internal Security Forces not to hold the violators accountable but “we will.”

Asked about the interior ministry portfolio in the new government, Baroud said he does not hold onto his post but he would continue to carry out his tasks as long as he is caretaker minister.