Pietton Meets Hariri: It’s Not Possible to Protect All Expatriates in Ivory Coast 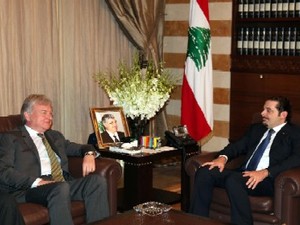 Pietton said after the meeting that he informed the PM that 650 expatriates have been placed under the French troops’ protection, noting however that no civilian was able to reach Abidjan airport even though air traffic has been restored.

He added a hope that French airlines would be able to resume its normal functioning keeping in mind that some 12,000 French expatriates live in Abidjan and the French government has not yet succeeded in directly evacuating them.

“The French forces are doing their utmost to ensure the safety of those who sought their help and they will continue on doing so,” the ambassador stressed.

Pietton added that contacts with Lebanese authorities are ongoing, saying that he held talks on Monday with Caretaker Foreign Minister Ali Shami and a number of Lebanese who visited the French Embassy.

“France is doing all it can to protect the lives in the Ivory Coast even thought the situation is complicated as some 80,000 Lebanese and 12,000 French expatriates live in Abidjan making it impossible to protect them all on the political and security levels,” he said.