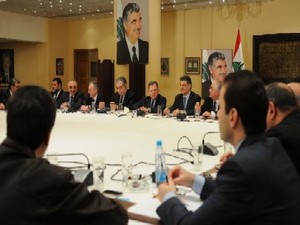 The Mustaqbal bloc condemned on Tuesday the various security incidents in Lebanon, including the kidnapping of the seven Estonians, saying that they are aimed at unjustly destabilizing the country.

It said after its weekly meeting headed by former Prime Minister Fouad Saniora: "These seemingly separate incidents may be part of a deliberate plan aimed at portraying Lebanon as an unstable state in order to target its institutions and security forces."

The bloc called on the Lebanese to be wary of such new attempts to harm the state institutions and the economy, urging the security forces to maintain professionalism and implement the laws to protect the citizens and bolster stability.

Addressing the developments in the Arab world, the Mustaqbal bloc hoped that the demands of the Arab youth be met as soon as possible.

It also condemned any regional and international meddling in the security of Arab states, including the statements of "sectarian incitement issued by Iranian officials regarding the situation in Bahrain."

In addition, the bloc condemned some "baseless" Lebanese media allegations accusing the Mustaqbal movement and the March 14 camp of meddling in the developments in Syria.

The Mustaqbal bloc also lauded the Lebanese government's efforts and those of friendly countries to evacuate Lebanese expatriates from the Ivory Coast, calling for intensifying these efforts to ensure their safe return to their homeland.