NATO Says 30% of Libyan Military Destroyed as Rebels Pushed Back 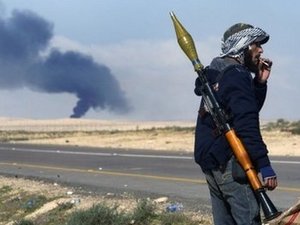 Libya's government said Tuesday it is ready to negotiate reforms but only provided Moammar Gadhafi is not forced out, as loyalist troops pushed rebel fighters back from the key oil port of Brega.

NATO-led air strikes have destroyed 30 percent of the regime's military capacity since the U.N.-backed bombing campaign started on March 19, an alliance commander said, even as the rebels suffered their first significant loss of territory in almost a week.

A one-million-barrel supertanker docked in the rebel-held port of Tobruk to pick up the first oil cargo for 18 days, the specialist shipping newsletter Lloyd's List said, in a big boost to the anti-Gadhafi forces' finances.

Government spokesman Moussa Ibrahim told journalists in Tripoli that everything except the departure of Gadhafi was negotiable, saying he was a unifying figure after ruling the nation for four decades.

"What kind of political system is implemented in the country? This is negotiable, we can talk about it," Ibrahim said. "We can have anything, elections, referendums."

But Gadhafi's future was sacrosanct, he stressed, only hours after the rebels flatly rejected a reported peace deal that could see the embattled leader's son take charge of the North African nation.

The "guide of the revolution", who has always rejected the title of head of state, was "the safety valve" for the unity of the country's tribes and people, Ibrahim said. "We think he is very important to lead any transition to a democratic and transparent model."

Gadhafi's son Seif al-Islam meanwhile dismissed former foreign minister Moussa Koussa, who defected to the West last week, as just a "sick and old" man who had succumbed to the psychological pressures of war.

Long seen as the heir apparent to his father before the wave of protests shook the country, Seif al-Islam briefly showed up at a Tripoli hotel to record an interview with the BBC in which he made dismissive comments about Koussa, once a pillar of the regime.

The son, who had not been seen in public since coalition air strikes began on March 19, said Koussa had been allowed to go abroad for medical treatment.

"Regarding Moussa Koussa, he said: 'I'm on a travel ban list and I'm sick and I have to go every three months to Cromwell hospital, in London, if I can get permission. I want to go there,' so ... and we allow him to go to Djerba, in Tunisia, so there's nothing against that," the younger Gadhafi said.

He added: "We have been bombed for two weeks, imagine the psychological pressure and you are sick and old, so you resign. It's a war."

Asked what information Koussa might provide the West, Seif al-Islam said: "He's sick, he's sick and old, of course, he would come out with funny stories."

But he dismissed the idea Koussa might have secrets to share, for instance on the extent of the involvement of the Libyan intelligence services, in which he was long a senior figure, in the December 1988 bombing of a U.S. airliner over Lockerbie, Scotland, which killed 270 people.

"Like what? The British and Americans know about Lockerbie, there's no secrets any more," the son said.

Scottish investigators expect to interview Koussa over the bombing within "the next few days", a spokesman for the nation's devolved government said after talks with British foreign ministry officials.

Gadhafi's forces pushed back rebels from the oil refinery town of Brega on the central Mediterranean coast despite a NATO air strike on loyalists who launched an intensive artillery barrage at their fleeing foes.

Heavy fighting erupted in the morning around Brega, with rebels using rocket launchers to counter the incoming artillery barrage of loyalists.

But by afternoon, the rebels were seen pulling back in hundreds of vehicles in the direction of Ajdabiya, a transport hub about 80 kilometers back towards their stronghold of Benghazi.

Tuesday's thrust by the loyalists appeared to mark the first real movement in the ground battle since last Thursday, when the two sides hunkered down around Brega after Gadhafi's forces sent the rebels stampeding out of a string of vital oil terminals.

Gadhafi's heavier weaponry has been hard hit by U.N.-backed strikes, now under the command of the NATO alliance as Washington has moved to give the lead to its European allies.

Van Uhm said the alliance was doing all it could to protect civilians in the besieged rebel-held third city of Misrata, after a Turkish aid ship brought out scores of wounded who told harrowing tales of the bombardment of residential areas by loyalist artillery.

"Misrata is a number one priority because of the situation on the ground over there," the NATO chief of allied operations said.

"We have confirmation that in Misrata tanks are being dispersed, being hidden, (and) humans being used as shields in order to prevent NATO sorties to identify targets," he said.

The city is the last major settlement in the west of Libya still under rebel control. Doctors said last week that 200 people had been killed there since the fighting began, a figure that is likely to have risen in recent days.

Meanwhile, a tanker docked in the rebel-port of Tobruk ready to load crude on Wednesday as the opposition seeks to take advantage of a pledge to market its oil exports by Gulf state Qatar, one of just three countries with France and Italy, to recognize their rival administration.