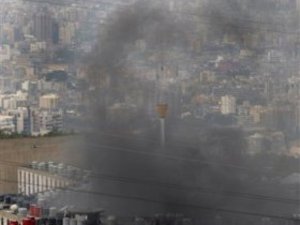 Security forces stormed Lebanon's notorious main prison of Roumieh on Tuesday where three prison guards were being detained by inmates who have been rioting since the weekend demanding an amnesty and better conditions.

"We have gained full control over the Roumieh prison after a joint operation by the army and the Internal Security Forces," said ISF chief Maj. Gen. Ashraf Rifi after his arrival at the prison to follow up on the situation.

"The operation is almost over and we're inspecting all the cells," Rifi added.

MTV reported that army troops and policemen had entered all the buildings and wards at Roumieh to contain the situation. "Other security personnel have deployed on the roofs of the buildings as an ISF repairs team is readying to fix the damaged facilities after the mutiny ends," the TV network added.

For its part, LBC television quoted an officer as saying that the storming of the prison was not aimed at clashing with the inmates.

"Reports about the death of a prisoner have not been confirmed yet," LBC added.

Father Marwan Ghanem, who is involved in negotiations to free the guards, told AFP earlier Tuesday that the detained guards were in good health and were being treated well.

"Authorities have been able to contact them to make sure they are OK," he said. "The inmates consider them as brothers and are holding them just to pressure authorities to respond to their demands."

A security official said the guards were not under threat and were simply being prevented from leaving an area of the prison.

Meanwhile, some 70 family members of the prisoners clashed with security forces outside the jail and burned tires while demanding they be given access to the inmates.

Ghanem said the power supply to the prison had been cut off to prevent inmates from recharging cell phones introduced illegally.

The inmates began rioting on Saturday, burning mattresses and smashing windows and doors to press their demands for better conditions at the overcrowded prison, 12 kilometers northeast of Beirut.

After a meeting with prisoners, a spokesman for the inmate's families held a press conference to announce the demands.

"Following the pardons that had been granted to Lebanese Forces leader Samir Geagea, Free Patriotic Movement leader MP Michel Aoun, Fatah official Sultan Abul Ainein, the Dinniyeh (Islamist) detainees and others, we demand an amnesty for all the prisoners in all the jails," the spokesman said, reciting a statement issued by Roumieh inmates.

Future News television quoted security sources as saying that a political decision by high-ranking officials had been taken to end the riots at Roumieh.

Meanwhile, Roumieh's tensions spread to the Jeb Jennine prison in the Bekaa, where inmates set their belongings and mattresses on fire, demanding an amnesty.

At once, the Internal Security Forces called in an army unit for backup as ambulances and firefighting vehicles arrived on the scene and controlled the fire.

As no clashes between the security forces and the 70 inmates were reported, relatives of some inmates gathered outside the prison, carrying banners demanding an amnesty for the prisoners.

Against the backdrop of the events, the ISF raised its alert level to 90 percent and reinforced its troops in prisons throughout Lebanon, state-run National News Agency reported.

Caretaker Interior Minister Ziad Baroud acknowledged at a press conference Tuesday that conditions at Roumieh were intolerable and that quick action was needed to prevent an escalation.

He noted that of the 3,700 inmates currently at the prison, only 721 had been tried and convicted.

"I am very supportive of their demands," Baroud said. "We are working to deal with the matter without having one drop of blood spilled."

He said his ministry has been working to improve conditions at Roumieh for two years, and urged other ministries and the cabinet to follow suit by speeding up the trials process and providing finance.

Poor conditions in prisons and a slow judicial process have sparked several riots in Lebanese jails. Some prisoners can be incarcerated for years before their cases come to court.

Compounding the situation is the political stalemate in Lebanon which has been without a government since January, when Prime Minister Saad Hariri's cabinet was toppled by Hizbullah and its allies.

Roumieh was originally built to house 1,500 inmates but is today crammed with nearly 4,000 men -- 65 percent of the country's prison population.