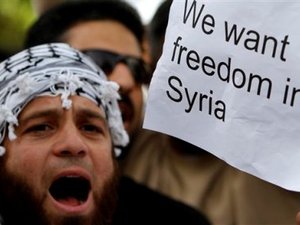 "Unidentified gunmen killed two policemen on Tuesday afternoon in Kfar Batna, as they were conducting a patrol," the news agency said. It did not give further details.

The editor of Syrian government daily Tishrin said on Thursday she is organizing talks with key opposition figures so that they can air their demands for political reforms, as deadly unrest enters its third week.

"I have contacted certain intellectuals who are in disagreement with the regime, to organize a dialogue in which each of them can express their opinions on political reforms and civil liberties for the authorities to take into account, Samira al-Masalma told Agence France Presse.

Masalma said she had already called two prominent writers, Fayez Sara and Louai Hussein, as well as philosopher Al-Tayeb Tizini, all three of whom have spent time in jail for their opinions.

"They have accepted this initiative for dialogue," she said, adding that she hoped that Michel Kilo, one of the most well-known opposition figures, would also participate.

When contacted by AFP, Hussein said this "is an embryonic project to create lines of communication between those who are not in power and those who are close to it but are not decision makers," with a view to avoiding upheaval in the country.

Mazen Darwish, director of the Syria Center for Media and Freedom of Expression, said Masalma's initiative had the "green light" from the authorities.

"In principle, the idea of a dialogue is a good thing, because it is precisely because of the lack of dialogue that has brought us to where we are today," Darwish said.

"It is useful because the street is well ahead of the political elites, and the authorities should hasten to respond to the demands of the street," he added.