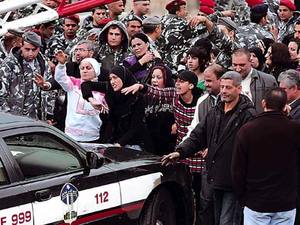 Caretaker Justice Minister Ibrahim Najjar suggested that one of the solutions to ease overcrowding at Roumieh prison was to expatriate some foreigners who have illegally entered Lebanon or whose work permits have expired.

“Those who have only one more year could serve their remaining sentence at another location,” Najjar told An Nahar daily in remarks published Wednesday.

He stressed that a solution should also be found to hundreds of Fatah al-Islam suspects. “Rather than waiting for the establishment of a court hall which could take two years or three, a barracks or … a school could be used” to try them.

He unveiled that experts came from France to study the case of prisoners. “The judiciary should carry out its duties,” the caretaker minister said.

Caretaker State Minister Mona Ofeish called for an urgent cabinet meeting to find a solution to “the tragedy of prisoners, particularly juveniles” whom she described as "time bombs.”

She suggested to An Nahar another solution to the overcrowded Roumieh prison, calling for “the separation of juveniles who are serving in the jail in contravention with the international agreement on children’s rights that Lebanon has signed.”

Ofeish said that a judge had ordered a jail term for a boy for eating a cake and drinking a bottle of refreshments without paying. “This is unacceptable,” she said.