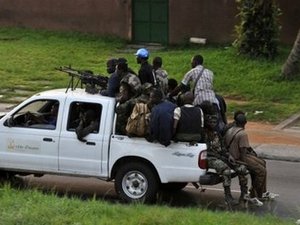 The first Middle East Airlines plane carrying Lebanese who have escaped the violence in Ivory Coast arrived at Beirut airport on Wednesday.

The National News Agency said around 136 Abidjan residents flew to Beirut from Ghana. They were transported by French authorities from the Ivory Coast to Mali and then to Ghana, it said.

Several people who were on board the plane told NNA that the properties and stores of Lebanese were looted and they had suffered tremendous losses in the African country.

They urged the government and Lebanese officials to “help the Lebanese community and evacuate them.”

Their appeal came a day after the Higher Defense Council held a meeting at Baabda palace to find a solution to the Lebanese community in the African country.

An Nahar daily quoted sources as saying that the conferees discussed ways to guarantee the protection of the Lebanese who want to stay in Ivory Coast by making contacts with friendly countries and the U.N.

They also agreed on guaranteeing the safe return of those seeking to escape the violence by contacting countries bordering the Ivory Coast to host them before their travel to Lebanon, the sources said.

The Council mulled logistics, administrative and diplomatic ways to implement this plan, they added.

MTV said a new flight from Ghana’s capital Accra will arrive in Beirut on Thursday morning.