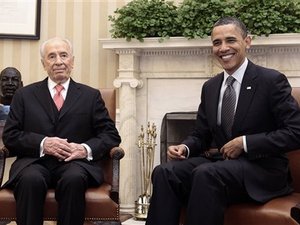 Reaching peace in the Middle East is more urgent than ever as pro-democracy uprisings rock the Arab world, President Barack Obama said Tuesday after meeting his Israeli counterpart Shimon Peres.

Separately, the United States warned that it was concerned about Israeli plans to build more than 900 new homes in east Jerusalem, reopening an old controversy between Washington and the Israeli government over settlements.

Obama told reporters that he and Peres had an "extensive discussion" about events in the turbulent Middle East during their lunch and shared the belief that this was a moment of "challenge and opportunity."

"With the winds of change blowing through the Arab world, it is more important than ever to create a peaceful solution between the Palestinians and the Israelis," Obama said.

The U.S. leader added that Peres "had interesting ideas around those issues" but did not elaborate, saying only that it was important to ensure economic opportunity as well as nurture democracy in countries such as Egypt.

Peres told reporters that given the fast-moving events in the Middle East it was important for direct talks between Israelis and Palestinians to resume as quickly as possible.

The U.S.-brokered talks were halted last year when the Palestinians declined to continue after an Israeli freeze on settlement expansion expired.

In a nod to the tumult in Arab nations around Israel, Peres told reporters that Israel wanted to be a friend to the Muslim world, saying the regional unrest was more a clash of "generations" than of "civilizations."

Obama has often had rocky relations with Israeli Prime Minister Benjamin Netanyahu, a right-leaning leader and former political foe of Peres, over U.S. efforts to encourage a permanent peace deal with the Palestinians.

But he has often sought the counsel of the veteran Israeli president, a fixture of Middle East peace moves and a regular guest at the White House, for decades.

Moves by the Obama administration to forge a peace deal, which has eluded successive leaders for decades, have been stymied by many issues, including continued Israeli settlement building.

On the eve of the talks between Peres and Obama, the Jerusalem city council approved the construction of 942 new homes in Gilo, a settlement neighborhood in the city's mostly Arab eastern sector, officials said.

Mark Toner, a State Department spokesman said Washington was "deeply concerned about the announcement of the approval for these units."

"We believe that through good-faith, direct negotiations the parties should mutually agree on an outcome that realizes the aspirations of both parties," Toner said.

The United States does not accept the legitimacy of continued Israeli settlements on land that Israel captured in the 1967 war with the Arabs, land which includes east Jerusalem, the West Bank and the Gaza Strip.

The U.S. government supports plans for a future Palestinian state along the pre-1967 boundaries, along with agreed land swaps.

Israel considers both sectors of the Holy City its "eternal, indivisible" capital, and does not view construction in the east to be settlement activity.

The Palestinians, however, want east Jerusalem as the capital of their future state and fiercely contest any actions to extend Israeli control over the sector.

Also on Tuesday, The New York Times reported that a group of prominent Israelis, including former heads of the Mossad and Shin Bet security services and the military were putting forth a new peace initiative.

The plan calls for a Palestinian state on nearly all of the West Bank and Gaza with a capital in East Jerusalem and an Israeli withdrawal from the Golan Heights and is similar to the so-called Clinton parameters established at Camp David in 2000.