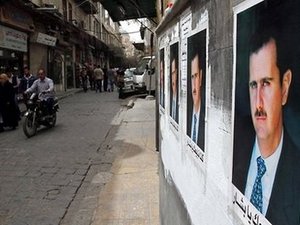 At least eight people, but perhaps as many as 15, were killed last Friday in Douma, near Damascus, when men in civilian clothes, suspected by witnesses to be security services, opened fire at protesters, HRW said.

It listed the names of the eight people buried in a mass funeral in Douma on Sunday and added that, according to Syrian human rights activists, seven additional protesters who died the same day were buried elsewhere.

Protesters in Douma cited by the HRW said they were chanting "peaceful, peaceful" when clashes broke out with riot police who resorted to teargas and beating demonstrators in an effort to snuff the Friday rally.

After two hours of confrontations, men in civilian clothes, whom protesters believed to be security services because they were positioned behind riot police, opened fired with Kalashnikovs at demonstrators.

An unnamed official told the official Syrian Arab News Agency (SANA) that an unknown "armed group" shot at both protesters and security forces from rooftops but provided no details about injuries to security forces.

"Instead of investigating those responsible for shootings, Syria's officials try to deflect responsibility by accusing unknown armed groups," Whitson said.

The rights body called on the United Nations Human Rights Council to "schedule a special session to address rights violations in Syria, including the unlawful use of force against demonstrators."

It also called on the Syrian president to set up a committee to investigate the shootings in Douma, as he did for the killings of protesters in the cities of Daraa and Latakia, and to hold those responsible accountable.

"The government should investigate each shooting, and hold accountable anyone responsible for the unlawful use of force," said the rights group.