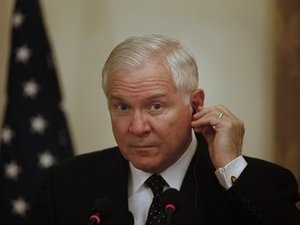 U.S. Secretary of Defense Robert Gates arrived in Riyadh on Wednesday to meet with Saudi King Abdullah, as the Arabian Peninsula is shaken by spiraling unrest in Yemen.

The meeting, which will be Gates' first with King Abdullah since the monarch returned home in February after months of treatment abroad for a back ailment, comes amid mounting international anger over bloodshed in the kingdom's southern neighbor Yemen and pressure on its president to stand down.

Yemeni President Ali Abdullah Saleh, a close U.S. and Saudi ally, has faced months of protests calling for his departure, in which around 125 people have been killed.

The Gulf Cooperation Council, of which Saudi Arabia is a leading member, is seeking to mediate between the Yemeni government and the opposition in a bid to find a way out of the country's political impasse.