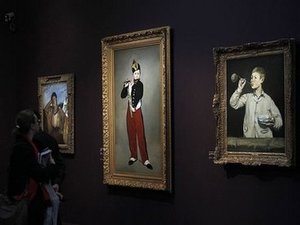 First it was Claude Monet. Now it's Edouard Manet's turn to get the blockbuster treatment in the city where he was born, lived, worked and died.

"Manet: The Man who Invented Modern Art" opened to the public on Tuesday at the Musee d'Orsay, where it is sure to pull in big crowds through to its scheduled final day on July 3.

"He was a beacon of modern painting, a great painter of history who had a sense of tragedy and mockery," Guy Cogeval, chairman of the Left Bank museum dedicated to impressionist and post-impressionist art, told Agence France Presse.

Going on show are nearly 140 of Manet's works, including 84 paintings, plus pastels, watercolors and drawings, complemented by about 30 other pieces from his artistic contemporaries.

It is the first time in 28 years that Paris has hosted a major show dedicated to Manet, who was born in the French capital in January 1832 and died there 51 years later.

His canvases -- of which "The Luncheon on the Grass" is no doubt the greatest ever portrayal of a riverside picnic -- not only reflected his life and times, but also radically changed ideas about the meaning of painting.

The Manet show comes on the heels of the biggest Monet retrospective in France in three decades, last autumn in the Grand Palais off the Champs-Elysees, organised in collaboration with the Musee d'Orsay.

Compared to Monet, his junior by eight years, who lived to the ripe old age of 86, Manet -- the son of a senior civil servant who turned to art after failing to get into naval college -- only worked for around 20 years.