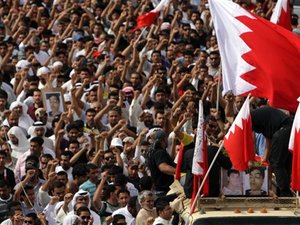 More than 200 Iranian parliamentarians on Wednesday condemned the "frightening crimes" of Saudi troops in Bahrain and demanded their departure, state television website reported.

"Today the protest shouts of Muslims in Iraq, Lebanon, Kuwait, Afghanistan, even in Saudi Arabia and many other countries are being heard due to the frightening crimes of Saudi occupiers against the oppressed people of Bahrain," they said in a statement.

By doing so "the Saudi army is being portrayed as an army without culture and unIslamic, and all Muslims demand the immediate exist of occupiers from Bahraini soil."

"If the Saudi army has might then it is better to use it against the Zionist crimes... in Gaza, since attacking defenseless Bahraini peoples' homes and violating the privacies of women, children and elderly is not the sign of power but a sign of an armed force's weakness and degradation."

Reports said the statement was issued by more than 200 deputies from the 290-seat, conservative-dominated parliament.

The Iranian MPs also condemned "the cruel killings of innocent people in Libya and Yemen... by people who bear the title of leaders of Islamic nations."

Iran's President Mahmoud Ahmadinejad on Monday demanded that Saudi-led forces brought into Bahrain amid protests by the Shiite majority in the kingdom should leave.

Ahmadinejad's reaction came a day after the Gulf Cooperation Council -- Bahrain, Kuwait, Oman, Qatar, Saudi Arabia and the United Arab Emirates -- accused Shiite Iran of plotting against the security of its Sunni monarchies and of fanning confessional discord.

In addition, seminary schools were shut across the Shiite-dominated Islamic republic on Wednesday, and their students gathered to protest over the situation in the region, especially in Bahrain.

"Death to Al-Khalifa" and "Death to Al-Saud," the demonstrators shouted in reference to the families that rule Bahrain and Saudi Arabia, in a live broadcast on state television from Iran's holy cities of Mashhad and Qom.