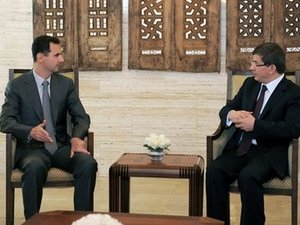 Turkish Foreign Minister Ahmet Davutoglu voiced his country's backing for a Syrian government reform package on Wednesday when he met President Bashar al-Assad, whose government has been shaken by three weeks of political unrest.

"Davutoglu expressed his country's support for the reform package adopted by the Syrian authorities," said the official SANA news agency citing a statement by the Syrian presidency.

He also "affirmed Turkey is ready to help in every possible way to accelerate the reforms in order to ensure the prosperity of the Syrian people and reinforce their security and stability".

President Assad, who received Davutoglu in Damascus, expressed "his gratitude to Turkey for being mindful of Syria's security and stability".

He added his interest in "profiting from the experience of certain countries, particularly Turkey, for drafting legislation relating to reforms".

On March 28, Turkish Prime Minister Tayyib Erdogan said he had advised the Syrian head of state to "positively respond" to people's demands for reform saying "this would help Syria to overcome the problems more easily."

"We have a border of 800 kilometers (with Syria) and we have family relations. We cannot remain silent," Erdogan said adding that Turkey was closely following events in Syria.

Once at odds and sharing a common border strewn with mines, Turkey and Syria have enjoyed several years of strengthened diplomatic and economic ties, with leaders of both countries regularly exchanging visits.

The two leaders discussed "the latest developments in the region, particularly the recent events in Syria," the news agency said.

Medvedev expressed "Russia's support to the reform process going on in Syria, particularly the procedures that have been taken by the Syrian leadership over the last few days to the benefit of the Syrian people," SANA added.