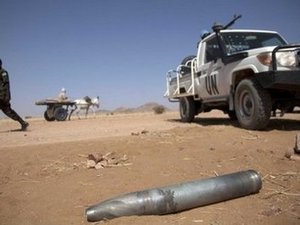 Sudanese Foreign Minister Ali Ahmad Karti accused Israel on Wednesday of carrying out an airstrike a day earlier on a car on Sudan's Red Sea coast that killed two people.

Karti's charge came as a number of Israeli newspapers spoke of the same thing, but the Israeli military and foreign ministry both declined to comment.

"From yesterday, we have indications that the attack was carried out by Israel. We are absolutely sure of this," Karti told a news conference in Khartoum.

The minister said that in recent days "there have been allegations from Israel that Sudan is supporting some Islamic groups".

"This is not true. When Israel makes these allegations, it is trying to justify what it did yesterday."

In response to a question, Karti said he did not know the identities of the people who had been killed, but insisted they were ordinary Sudanese citizens traveling from the airport.

"We don't know why Israel targeted these people," he added.

On Tuesday evening, at around 10:00 pm (1900 GMT), an unidentified plane flew in from the Red Sea and fired a missile at a small car traveling from the airport to Port Sudan, killing both passengers and destroying the vehicle, the head of the state assembly told Agence France Presse.

A police spokesman confirmed the attack, which took place 15 kilometers south of Sudan's main port city, and said a team had been sent to investigate.

"IDF (the Israeli military) carried out an attack in Sudan" read the front page story in Israel's top-selling Yediot Aharonot.

"Planes which approached from the Red Sea assassinated wanted men in Africa," read the strapline.

News of the attack was also carried on the front pages of Israel HaYom, a freesheet considered close to Israeli Prime Minister Benjamin Netanyahu, which billed it as "Liquidation in Sudan".

It also appeared as a last-minute bulletin in the left-leaning Haaretz.

In the past, Israeli officials have expressed concern about suspected arms smuggling through Sudan, whose government has close ties with Gaza's Hamas rulers.

Tuesday's attack has revived memories of a similar strike, by foreign aircraft, on a truck convoy in eastern Sudan, near the Egyptian border, in January 2009.

U.S. and Israeli media reported that the trucks were carrying weapons to the Hamas-ruled Gaza Strip, to supply Palestinian militants during Israel's devastating three-week offensive against the territory.

Sudanese officials claimed the convoy had been transporting illegal immigrants to Egypt.

Hamas has close ties with Khartoum and has long maintained a base in Sudan, where the group's exiled chief Khaled Meshaal is a frequent visitor.

Speaking at a conference in Khartoum last month, Meshaal hailed the sweeping political changes in Egypt, which he said had given the Palestinian people their lives back, and called for renewed struggle against the Jewish state.

Just a few days later, a private Egyptian TV channel broadcast unconfirmed reports that the Egyptian army had shelled a convoy of vehicles laden with arms near the Sudanese border.

The United States maintains a counter-terrorism base in Djibouti which has been active against al-Qaida suspects on both sides of the Red Sea but its reported strikes against jihadist targets are all said to have involved drones.

The Sudanese foreign minister made the accusations shortly after meeting with the new U.S. special envoy to Sudan, Princeton Lyman, on his first trip to Khartoum since being appointed late last month.