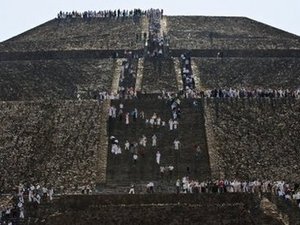 Archeologists are unearthing a 2,000-year-old tunnel outside bustling modern day Mexico City searching for clues to one of the region's most influential former civilizations.

Heavy rains at the site of Teotihuacan, some 25 miles (40 kilometers) from the capital, accidentally provided the first sign of the tunnel's existence in 2003, when the water made a tiny hole in the ground.

Six years later, a team financed by Mexico's National Institute of Anthropology and History (INAH) started digging at the site, which is one of the most visited in Mexico.

Teotihuacan arose as a new religious center around the time of Christ and became possibly the most influential city in pre-Hispanic North America at the time, with a population of 200,000 at its peak.

It is thought to have been abandoned in the seventh century due to economic, social and political problems.

Only around five percent of Teotihuacan has been excavated so far despite more than 100 years of exploration of the former city, which stretches over some 9.7 square miles (25 square kilometers).

Archeologists believe the tunnel will lead to three chambers, which may contain the remains of the leaders of the civilization and help explain their beliefs.

No monarch's tomb has ever been found at the site, which was already deserted when the Aztecs arrived in the area in the 1300s.

But the search for the tombs is not the only focus of investigations.

"It's not something we're obsessed with. We keep working and we're going to try to understand the tunnel on its own and the implications it has for Mesoamerican thought and religion," said archeologist Sergio Gomez.

Last August, digging down some 12 meters (yards), archeologists discovered the tunnel's opening in front of the Temple of Quetzacoatl, or the Plumed Serpent.

"It was very gratifying to be able to find the tunnel's entrance because that shows that the hypotheses were correct," Gomez said.

"We know that Teotihuacan was built as a replica of how they saw the cosmos, the universe. We imagine the tunnel to be a recreation of the underworld."

Some 30 archeologists, biologists and architects work daily under a small tent protecting the tunnel's opening, to the south of the imposing Pyramids of the Sun and Moon.

As some sieve through piles of stones and earth over wheelbarrows to pick out artifacts retrieved underground, archeologists descend three ladders down a hole several meters wide and 12 meters deep.

They believe that a deliberate effort was made to pile up stones and even pieces of a destroyed temple to block the tunnel, sometime between 200 and 300 AD.

Precious pieces are believed to have been thrown on to the pile as an offering by the elite.

The team has already removed some 300 metric tons of material, including 60,000 tiny fragments of materials such as jade, bone and ceramics.

Most were ornaments used by the elite, as well as beads and shells from both coasts of Mexico, Gomez said.

A small, remote-controlled robot -- the first to be used to explore Mexico's ruins -- took a camera inside a small opening before researchers finally entered the tunnel last November.

But they have advanced only seven meters through the tunnel which they believe, thanks to the help of radar technology, to be 120 meters long.

In the hot, damp underground chamber, small labels hang from the curved, rocky roof to show each meter excavated so far.

Archeologists say they can see tool marks in the ceiling which date from the time the tunnel was excavated in the rock.

Wearing mask and helmets as they chip away with small tools, they expect to reach the end of the tunnel in several years' time.

"It's very, very delicate and meticulous work. We have to record every type of change," said researcher Jorge Zavala.