From The Amazon to The Edge of Lima, 'Boom' Remains a Dream 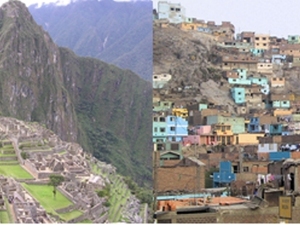 Thousands of Peruvians on the edge of Lima are a world away from the capital's prosperity, with little hope they will share the fruit of a decade of growth, despite promises from presidential candidates.

Hundreds of homes sit atop a former rubbish dump in the slum of Cantagallo, which has a clear view across the rapidly developing capital and lies only a mile (some two kilometers) from the presidential palace.

The four main candidates competing for the presidency Sunday aim to maintain Peru's record growth but face growing frustration among a third of the nation of some 29 million who still live in poverty.

Some 2,000 inhabitants of the Lima slum include members of the Shipibo Amazon tribe who migrated there a decade ago from the eastern region of Ucayali, leaving behind inadequate health care and education.

But they are still seeking to rise out of poverty.

"We've been living in Lima for 10 years and we're in the same situation," said 37-year-old Jonas Franco, pointing to two buckets of contaminated water used for cooking and washing in the corner of the small home he shares with his wife and three small daughters.

Franco is not bothered about who wins in Sunday's first round of presidential elections, since "there's so little confidence" in the candidates.

"Where's the growth we've heard about when children learn to write on their knees, sitting on the ground?" Franco said.

Some children and teenagers now study in Lima, and find odd jobs or sell handicrafts, while their families try to send money home to support their people's future.

Amazonian Indians are the main losers in Peru. They were historically ignored or exploited, they lack national representation and they have been stigmatized in recent years for resistance to mining or forestry projects.

The incomprehension reached a climax in June 2009, when clashes between police and indigenous people left 34 dead in the northern town of Bagua.

"It's time for us to go to Congress. We can't remain second-class citizens," Franco said.

He is standing as an independent candidate in a legislative vote also taking place Sunday, in a bid to become "spokesman for the poor."

"How can we not improve on those who have been there (in Congress) for 20 or 25 years?" he asked.

Peru's growth began in the 1990s, when it become one of Latin America's most open economies under Alberto Fujimori.

It accelerated after 2000, helped by a boom in world prices for minerals such as silver, copper and zinc, and was 8.8 percent last year alone.

For example, Peru was 23rd out of 26 in Latin America for access to waste treatment.

Franco said he had to build a makeshift sewage system with pipes leading into the Rimac river below the slum, two miles from the Pacific.

The Shipibos, as well as former itinerant workers expelled from the city center who also live in Cantagallo, reject the popular political "chorreo" or "drip" theory that growth naturally filters down to benefit the worst off.

"All (the political parties) have come to Cantagallo, they've all made promises, and of course they forget us," said resident Carmen Rosa Chavez.

Chavez dismissed the presidential candidates while conceding that the leftist favorite, Ollanta Humala, had "spoken of poor people's rights."

"It's not that Peruvians are against the system," said sociologist Julio Cotler, from the Institute of Peruvian Studies. "They're against how the system works for them.

"At a time when there's economic growth and more jobs, when all the newspapers are saying it's the Peruvian miracle, Peruvians aren't feeling the miracle."