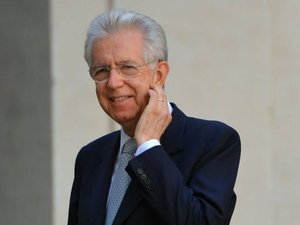 Preventing the European Central Bank from buying bonds issued by countries like Italy and Spain could drive up inflation in Germany, 0 warned Wednesday in an interview.

Monti's comments published in the Italian daily Il Sole 24 Ore a few hours before he was due in Berlin argued for resuming a revamped ECB bond-purchasing program that has been opposed by the influential German central bank.

Pointing to the wide spread between the interest rate, or yield, on Italian and German bonds, Monti said it could lead to a "potential rise in inflation for Germany which, I believe, doesn't correspond to ECB or German government's wishes."

The Italian premier explained that inflation could result from a substantial rise in the amount of money available within the 17-nation Eurozone along with low interest rates and rising bond prices.

Germans are reluctant to back large-scale purchases of bonds issued by heavily-indebted Eurozone partners, but Europe's biggest economy is historically sensitive to the threat of inflation.

Monti acknowledged that the significantly higher yield on Italian bonds was a serious problem, and was "a factor that seriously alters the international competitiveness between companies."

Monti declined to confirm that he would raise the issue with German Chancellor Angela Merkel, but told the Italian newspaper: "It's right to stress that this is a serious imbalance for us, but it's also a risk for those countries that today seem to benefit from it," like Germany.