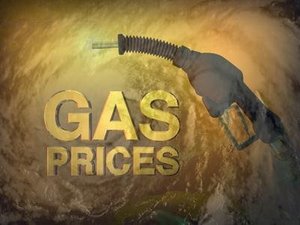 Hurricane Isaac bore down on New Orleans early Wednesday after making landfall, seven years to the day after Katrina devastated the "Big Easy" and killed more than 1,800 people along the U.S. Gulf Coast.

"Oil prices are slightly down this morning because it is expected that oil production in the Gulf of Mexico will quickly return to normal."

PVM analyst Tamas Varga added: "It is now believed that the overall damage will be lower than expected, and largely limited to flooding effects onshore."

Isaac, which reached hurricane strength Tuesday and was packing maximum sustained winds of 80 miles (130 kilometers) per hour, lashed southern Louisiana with heavy rains and strong winds, as residents hunkered down.

The U.S. National Hurricane Center said the category one storm had generated a "dangerous storm surge" along the northern Gulf Coast, with a surge of 11 feet (three meters) reported in Louisiana and fears of coastal flooding.

Powerful winds knocked over trees and ripped down power lines, leaving some 390,000 people without power, according to Entergy Louisiana, a local utility.

Later on Wednesday, the U.S. government's Department of Energy will publish its snapshot of American oil inventories for the week ending August 24.

Fritsch added: "The consequences of Isaac will not be evident until next week's inventory data are published. In the short term, prices are likely to fall moderately as U.S. oil production normalizes."

At the same time, traders digested a call by the Group of Seven (G7) nations for oil producers to increase output.

G7 finance ministers said in a statement issued Tuesday that crude supply needed to be increased as higher prices posed "substantial risks" to the global economy.

They also suggested that leading industrial economies were ready to tap into global strategic oil reserves to keep price pressure down.

"We stand ready to call upon the International Energy Agency to take appropriate action to ensure that the market is fully and timely supplied," the statement said.