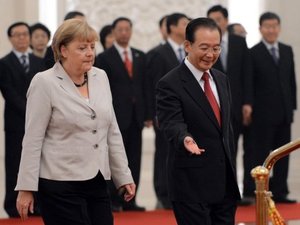 With the nearly three-year-old Eurozone debt crisis showing signs of spreading to China, the world's second largest economy, Beijing views Germany as a key player in tackling the problem.

Leading several ministers and a high-powered business delegation, Merkel met Premier Wen Jiabao at the start of her two-day trip, during which she will also travel to an assembly plant of European planemaker Airbus in nearby Tianjin city.

Europeans have expressed the hope that China could deploy some of its foreign exchange reserves -- the world's largest -- to invest in European Union bailout funds, although there is little sign of this happening yet.

"Currently, the global financial crisis and the European sovereign debt crisis are having a deepening impact on the world," Wen said at the opening of the meeting.

The two sides are due to sign a series of commercial agreements later Thursday, details of which have not yet been released, as they seek to bolster economic ties, amid signs both are being hit by the Eurozone crisis.

"China and Germany, both as major economies and... manufacturing and exporting giants, have been working together to address the crisis," Chinese Vice Foreign Minister Song Tao wrote in the state-run China Daily newspaper.

Germany is China's top trade partner in the EU with nearly half of all European exports to China coming from Germany. Meanwhile, nearly a quarter of all EU imports from China land in Germany.

"Germany is an export-oriented economy, while China has the largest market in the world," Song said, adding the two nations could cooperate on emerging industries, infrastructure and renewable energy, among other areas.

Chancellor Merkel was also expected to raise non-economic issues with Wen, including sensitive topics such as the Syrian crisis and human rights and press freedom in China.

China has joined Russia in repeatedly using their vetoes to scuttle U.N. Security Council resolutions aimed at tackling the deadly conflict in Syria, putting them at odds with Western powers.

Merkel is likely to raise the issue of the freedom of the press with Wen following complaints by German journalists who say the difficulties of reporting in China are increasing.

Before this visit, German journalists working in China wrote a letter to Merkel saying authorities in Beijing had been "willfully obstructing" their work by threatening not to renew their visas and intimidating local assistants.

A German official confirmed that the topic of human rights would also be on the agenda, amid pressure on Merkel to raise the issue of Tibet.

I just like the helpful info you provide on your articles.
I will bookmark your blog and take a look at once more right here regularly.
I'm reasonably certain I will be told plenty of new stuff proper right here! Best of luck for the next!

I was suggested this blog by my cousin. I'm not sure whether this post is written by him as no one else know such detailed about my problem. You're wonderful!
Thanks!

If you are going for most excellent contents like me, only visit
this site every day as it gives quality contents,
thanks