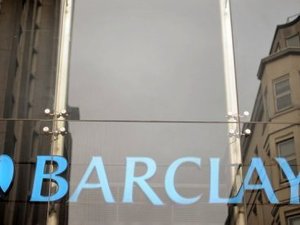 "Barclays announce that Antony Jenkins has been appointed as a director and as group chief executive of Barclays with immediate effect," the group said in an official statement.

The Briton's appointment meanwhile comes one day after Barclays revealed that the Serious Fraud Office (SFO) has launched a probe into the 2008 investment deal between the bank and Qatar's sovereign wealth fund.

Jenkins declared that his top priority would be to repair the bank's damaged reputation.

"We have made serious mistakes in recent years and clearly failed to keep pace with our stakeholders' expectations," he said in the statement.

"We have an obligation to all of those stakeholders -- customers, clients, shareholders, colleagues and broader society -- and a unique opportunity to restore Barclays' reputation by making it the 'go to' bank in all of our chosen markets.

"That journey will take time, we have much to do, and I look forward to getting started immediately."

Jenkins, 51, was head of Barclays' Retail and Business Banking (RBB) business. He has been a member of the group executive committee of Barclays since 2009.

U.S. national Diamond resigned in July over the rate rigging scandal that engulfed the bank and sullied London's image as a financial center.

The scandal erupted in June, when British and U.S. regulators fined Barclays £290 million ($453 million, 369 million euros) after the bank admitted attempting to manipulate the Libor and Euribor rates between 2005 and 2009.

However, the fallout risks becoming much wider, with analysts claiming that the lender could face massive lawsuits, since mortgage rates passed onto customers were influenced by Libor rates.

Barclays had already announced that industry veteran David Walker would become its new chairman from November, succeeding Marcus Agius who also quit over the Libor affair.

Separately, Barclays had announced late Wednesday that the SFO had commenced an investigation into payments "under certain commercial agreements between Barclays and Qatar Holding LLC".

The Financial Services Authority (FSA) regulator revealed in July it was investigating fees paid by Barclays to Qatar during the 2008 credit crisis.

Qatar invested more than £2 billion ($3.1 billion, 2.5 billion euros) into the bank in June 2008, and five months later it raised a further £6.8 billion from a group of Middle Eastern investors, allowing it to avoid being semi-nationalized.

Libor, or London Interbank Offered Rate, is a flagship London instrument used as an interest benchmark throughout the world, while Euribor is the Eurozone equivalent. The rates affect what banks, businesses and individuals pay to borrow money.