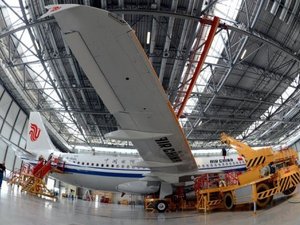 China on Thursday signed a $3.5 billion deal to buy 50 Airbus A320 jets during a visit by German leader Angela Merkel, the official Xinhua news agency said.

The agreement between ICBC Leasing and Airbus was part of a series of agreements signed by China and Germany at the start of a two-day visit by Merkel aimed at boosting trade between the two economic powers.

ICBC Leasing is a unit of state-owned bank ICBC.

Other agreements include one relating to assembling Airbus planes in China, Xinhua said, as well as deals in areas such as automobiles, energy, the environment and health.

China, the world's second-largest economy, has a fast-growing aviation sector and manufacturers are racing to capture orders as the country's increasingly affluent consumers more frequently take to the air when travelling.

Merkel, making her second visit to Beijing in seven months, met Chinese Premier Wen Jiabao on Thursday. She was accompanied by a high-level business delegation.

Bilateral trade between the two countries reached $169 billion in 2011, an 18.9-percent rise on the previous year.