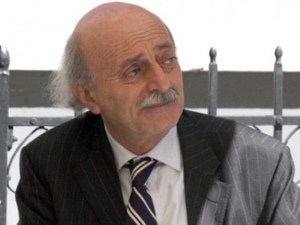 “What was the impact of Sayyed Khamenei’s meeting of Feltman on some March 8 members?” Jumblat wondered in remarks published in An Nahar daily on Friday.

“Some of them are uncomfortable and will increase their consumption of Valium pills when they go to sleep,” the PSP chief mocked.

Feltman attended on Wednesday a meeting between U.N. chief Ban Ki-moon and Khamenei on the sidelines of the summit of the Non-Aligned Movement in Tehran.

The Hizbullah-led March 8 coalition is backed by Iran and has repeatedly accused Feltman, who was U.S. assistant secretary of state for near eastern affairs before taking the U.N. job, of inciting the March 14 opposition against the Shiite party.

On Lebanon’s chairmanship of the Arab League Ministerial Council on Sept. 5, Jumblat warned that such a move would reflect negatively on the Lebanese government.

“The coming days will prove my words,” he told An Nahar.

Reports have said that top Lebanese officials were divided on whether Lebanon to assume that role.

As Safir daily quoted on Tuesday a cabinet minister loyal to Jumblat as saying that the PSP ministers and those loyal to President Michel Suleiman prefer to reject Lebanon’s mission in the Arab League and ask Libya to take over the chairmanship of the Ministerial Council.

The centrist parties believe that this role would further instigate tension in Lebanon which has been reeling from a political and security crisis, the newspaper said.

An Nahar also asked Jumblat about a rally that the PSP is organizing near Samir Kassir Square in downtown Beirut on Friday afternoon to demand Syrian Ambassador Ali Abdul Karim Ali’s expulsion.

But the Druze leader refused to comment, saying he gives the organizers the “freedom to decide” what statement to issue during the rally.

He also denied that the ministers loyal to him had ties to the call by the PSP youth movement for Ali’s expulsion.

The struck a deal eliminating March 8. They will need more than Valium.

they know there days are numbered.Valium will not help them .

They dont need Valium ,they need a ship to take them to Iran..

It'd be great if all M8 took a ship to Iran, all M8 a jet to Israel, and leave Lebanon to the Lebanese...

waiting by the river is so interesting

numbers don't mean a thing. Your opinion is important

looool your comment proves that M8 and M14 are 2 faces of the same coin...

I don't see where M8 would have a problem with a Feltman-Khamenei meeting?
Rivals meet often... Hafez el Assad and Kissinger met numerous times... I though Jumblat was more subtle...

assad executed the kessinger plan:
1) didnt he give israel the "peaceful golan
2)didnt he get lebanon in return for the same period
3)didnt he send his army to cover the invasion of irak
4)didnt he stir religious conflicts in the area and especially in lebanon..
but bilad el arz are prevailing no doubt about it.

And who knows more about narcotics than the pusher and addict himself?

Who cares about Jumblatt ?
Can't he stop fooling everyone

Haraket_Amal: Come on, jumblatt is Berri's best friend! Check with your boss

I prefer Amal. They have slaughtered many from the filthy Persian militia. They are the only true representative of Lebanese Shiaa.

valium ya beik? it takes one to know one...

Mate (The 1 Phoenix) hold your horses for a minute. As you are will aware that non is better than the other here. Not any of the Lebanese politicians are clean of the war crimes not to include the use and abuse of public property and money to their own advantage.

Furthermore, you are talking about the real war. what do you know about it? Have you lived it ? where you in a location were people were living their days with only gods mercy to protect them ?

Mate we did all lose a lot. The only people that gained were the politicians and their dogs. you and me lost our families and for what reason? so that all these idiots will decide that everything is OK and after they drowned the country into years of misery and destruction while they filled their pockets and egos.

If I where you, id rather waste my time on something meaningful not pitiful as these scum.

Mate grow up and get a life. people reached Mars and still we are arguing about a Mars bar in Lebanon..