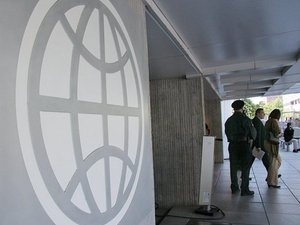 Global food prices soared 10 percent in July, increasing the threat to millions of the world's poor especially in Africa and the Middle East, the World Bank said Thursday.

Drought and soaring temperatures in the United States and Eastern Europe have savaged some of the key grain crops that feed much of the world, with prices for corn (maize) and soybeans hitting records.

The Bank warned that a repeat of the price surges of mid-2008 and early 2011 endangered the health of millions in food-importing countries, with sub-Saharan Africa most at risk.

"Africa and the Middle East are particularly vulnerable, but so are people in other countries where the prices of grains have gone up abruptly," he said.

From June to July, the prices of both corn and wheat jumped by 25 percent while soybeans were up 17 percent.

Strong rice crops in Thailand and elsewhere have pushed the rice price down by four percent in the same period.

The Middle East and North and Sub-Saharan Africa remain the "most vulnerable to this global shock," the World Bank said.

"They have large food import bills, their food consumption is a large share of average household spending, and they have limited fiscal space and comparatively weaker protective mechanisms," the Bank said in its Food Price Watch report.

"Domestic food prices in these regions have also experienced sharp increases even before the global shock due to seasonal trends, poor past harvests, and conflict," it said.

The effect has already turned up starkly in Sub-Saharan Africa. Corn prices have jumped 113 percent in Mozambique and sorghum has rocketed 180 percent and 220 percent in Sudan and South Sudan, respectively.

In Mali, where a severe food crisis is compounded by political strife, meanwhile, U.N. humanitarian chief Valerie Amos on Thursday called for more resources in Mali to save children from severe malnutrition.

"Children's lives are being blighted by a nutritional crisis which we have the knowledge and capacity to address, but we lack the funds to do everything that is needed," Amos said after a two-day visit to the West African nation.

The World Bank said that the diversion of corn to produce ethanol biofuel -- which takes up to 40 percent of U.S. corn production -- is a key factor in the sharp rise in the corn price.

The U.N. Food and Agricultural Organization's chief called earlier this month on Washington to rescind its mandate for fuel producers to use ethanol in gasoline and other fuel products, to ease the pressure on corn prices.

The World Bank pointed out that there is also a spillover effect on wheat prices: that as corn supplies tighten, wheat becomes used more as a substitute for corn in livestock feed.

On Tuesday officials of the Group of 20 leading economies held a video conference on rising food prices, but concluded that there was no immediate threat to global food supplies, according to France's ministry of agriculture.

They opted to wait for the U.S. government's key monthly crop review that comes out on September 12 before weighing whether more urgent attention was needed to the issue.

"Oxfam is already seeing the devastating impact of food price volatility in developing countries that rely on food imports," he said.

"The G20 has decided to wait for September's U.S. crop report before deciding whether to take action on food prices, but they must call it now before prices spiral out of control and push more people into hunger."