Single Supervisor for All Eurozone Banks In 2014 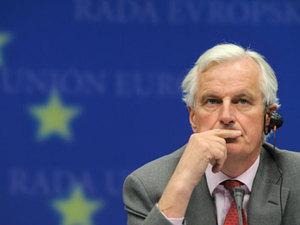 EU Commissioner Michel Barnier said Friday that Eurozone banks would gradually come under the remit of a new common supervisor with a complete shift over for all 6,000 lenders on January 1, 2014.

Barnier is leading preparations for plans for a common supervisor, which was part of a wider agreement on letting the new Eurozone rescue fund directly rescue lenders instead of forcing countries to seek a full bailout.

There are disagreements between the 17 Eurozone members as well as the wider European Union over how fast and how far to centralize the current system which relies on national supervisors.

"We never envisaged a global switchover from one day to the next to direct and integrated supervision," Barnier, the EU's internal markets commissioner, was quoted as saying in the French business daily Les Echos.

He said any banks which receive support from the European Stability Mechanism (ESM) rescue fund should immediately come under the purview of the new regulator, which is hoped will begin operations on January 1, 2013.

"From that date, theoretically, the direct recapitalization of banks by the rescue fund will be possible," said Barnier.

Then the common supervisor would take over responsibility for the largest so-called systemically important banks, and finally all 6,000 Eurozone banks from January 1, 2014.

EU Commission chief Jose Manuel Barroso is to present the proposals on September 12, with the European Central Bank expected to be handed the bank supervisor role.

But the Commission and Germany appear to still differ on the scope for the bank supervisor.

German Finance Minister Wolfgang Schaeuble said "we cannot expect a European watchdog to supervise directly all of the region's lenders -- 6,000 in the Eurozone alone -- effectively."

Schaeuble called this "common sense", although critics charge that Germany is seeking to protect its regional banks.

Barnier noted that "many problems have been caused in recent years by non-systemic banks, like Northern Rock, Dexia and Bankia."

The 2007 collapse of mortgage lender Northern Rock sparked Britain's first bank run in modern history, while Dexia has forced France and Belgium into two bailouts and Bankia's problems have pushed Spain to seek up to 100 billion euros to rescue its banks.

Barnier said however that for functions that do not impact on financial stability, such as consumer protection, national regulators would be left in charge.

He said to avoid any conflicts with the ECB's monetary policy objectives -- which has prompted the central bank to pump over one trillion euros in low-cost funds into Eurozone banks -- the supervisory function would be set up under a different council.

Barnier said this would allow non-Eurozone countries that wished to join the bank supervisory function without having any voice in ECB monetary policy decisions.

The EU commissioner noted that the bank supervisor was one step towards a banking union, which eventually includes a mechanism to close down failed banks, and said it is "essential to recovering financial stability which the economy urgently needs."

A common deposit guarantee fund would be a particularly helpful feature to calm investors across the Eurozone, although this issue is more politically sensitive.