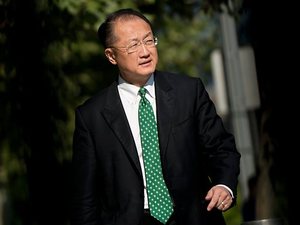 World Bank President Jim Yong Kim will visit Ivory Coast and South Africa next week on his first official foreign trip since taking over as head of the global lender in July.

Kim will visit the two countries on September 4-6 to discuss how the World Bank can help African nations achieve higher economic growth, reduce poverty, and create jobs, the international organization said in a statement Thursday.

"Reducing poverty and creating opportunity for people to succeed are vital to the World Bank Group's mission, and I plan to continue to strengthen our work towards these goals," he said.

"For this reason I chose Africa for my first official visit as World Bank Group president, recognizing the priority given by the continent's governments to faster growth and less poverty."

Kim said he would also discuss the importance of reducing trade barriers and better integrating the continent's fractured economies.

He is set to meet the leaders of both countries as well as cabinet ministers, business representatives, women leaders and young people.

Unlike the bankers, diplomats and economists who have run the World Bank in the past, Kim brings a background in medicine and a record of developing programs to fight diseases like HIV/AIDS and tuberculosis in poor countries.