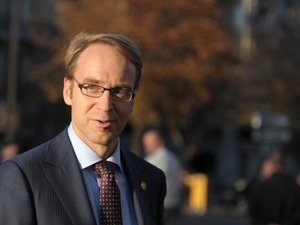 The head of the German central bank or Bundesbank has threatened to resign amid a festering fight with the European Central Bank over its anti-crisis measures, the daily Bild reported Friday.

The German government has pressed Weidmann to remain, however, and the Bundesbank chief -- who like each of the other 16 Eurozone central bank chiefs has only one vote at the ECB's monthly policy setting meetings -- has agreed to stay on at least for the time being and fight his corner at next week's meeting.

For the moment, he believes that is the way to fight for the stability of the euro and the independence of the ECB, the newspaper said.

"We are not commenting," a spokesman told Agence France Presse and pointed to Weidmann's recent interview in the weekly Der Spiegel magazine, where he was explicitly asked whether he had considered resigning.

He replied: "I can do my duty best by staying in office. I'll work for the euro to remain just as stable as the Deutschmark."

Weidmann argues the bond-buying program, which has worked in the past at bringing down the borrowing costs of crisis-hit countries, is tantamount to monetary financing, where the central bank prints money to pay off a country's debt -- expressly forbidden under the ECB's statutes.

He fears the measures will fuel inflation, ease the pressure on over-spending governments to get their finances in order and erode the independence of the ECB.

"One should not underestimate the danger that financing by central banks can get one hooked like a drug," he warned in the latest edition of Der Spiegel magazine.

Weidmann's predecessor Axel Weber already quit in protest over the program, as did the ECB's former chief economist Juergen Stark, also a German.

Weidmann has never made any secret of his opposition.

But Draghi issued a public plea for the German central banker to drop his resistance in a newspaper article earlier this week, saying the program and other special emergency measures were justified by the current exceptional circumstances.

A politician from Angela Merkel's conservative CDU party, budgetary expert Klaus-Peter Willsch, warned against the possibility of Weidmann resigning in an article in the online edition of the business daily Handelsblatt.

"Weidmann will only be able to stay the course if he can sure he has the backing of his home country," Willsch said.

"My plea is for German policymakers to allow no room for doubt on this," he said.