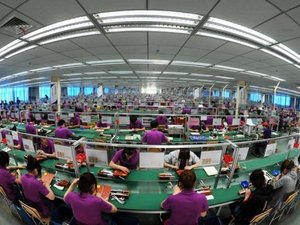 China's manufacturing activity slumped in August to a nine-month low, official figures showed Saturday, in the latest sign of serious weakness in the world's second-largest economy.

The government's purchasing managers' index (PMI) fell to 49.2 in August from 50.1 in July, according to a statement released by the China Federation of Logistics and Purchasing and the National Bureau of Statistics.

A PMI reading above 50 indicates expansion, while one below 50 points to contraction.

The August reading was the lowest since 49.0 in November last year, and below the median forecast of 50.0 in a survey of 11 economists by Dow Jones Newswires.

HSBC is scheduled to release its final PMI figure for August on Monday.

China's economy slowed to growth of 7.6 percent in the second quarter up until the end of June, the worst performance in three years.

In the current third quarter, trade, industrial output and retail sales figures for July came in weak, raising concerns that government efforts to stimulate growth may be insufficient.

China has tried to boost its economy with interest rate cuts and by lowering the amount of funds that banks must keep on hand in a bid to spur the kind of lending that could stimulate a rebound.