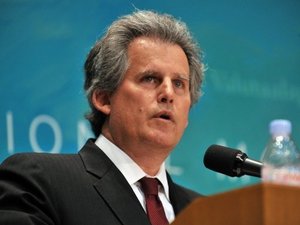 IMF Deputy Managing Director David Lipton said Friday he was optimistic that Greece could get its restructuring program back on track and remain in the Eurozone.

Lipton told CNBC television that the International Monetary Fund believes that Greek Prime Minister Antonis Samaras and his team "are dedicated to finding an appropriate path for adjustment, getting things back on track, and we're trying to help."

"I'm optimistic in the sense that I think they're working hard. They want to stay in the Eurozone. They want to get their country going again," he told CNBC.

Greece's cabinet was meeting on Friday to iron out differences between the country's coalition partners on a painful new round of cuts necessary to unlock bankruptcy-saving loans from the European Union and the IMF.

Under pressure to put through the cuts from key Eurozone power Germany, Samaras has run into resistance from his socialist and moderate leftist allies over additional cuts to salaries and pensions which the government partnership had promised to resist when it was formed in June.

Samaras on Thursday said this would be the last package of cuts and insisted that the sacrifices were "inevitable" to keep the country in the Eurozone.

"Without them, the country would return to zero credibility and, in essence, would exit the Eurozone," the premier told members of his conservative party.

Lipton meanwhile said the Eurozone itself had more work to do to shore up confidence in the monetary union.

"Europe needs to show the direction that the European experiment is going, how they will complete the monetary union."