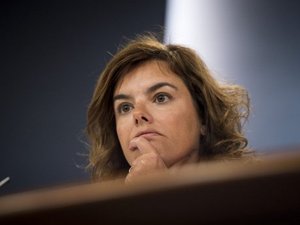 Spain's cabinet approved a major financial reform package on Friday including the creation of a "bad bank" to buy troubled property assets and bad loans from lenders.

Spain had agreed to push through the changes as a condition for receiving a banking sector rescue loan of up to 100 billion euros ($125 billion) from its Eurozone partners.

"We must clean up the financial sector to have banks lending again," she told a news conference.

"With this reform, we respect our European commitments," she said.

Spanish banks have been weighed down with rising bad loans and repossessed real estate since the collapse of a property bubble in 2008, which sent the jobless rate soaring to nearly 25 percent.

The "bad bank" will last for between 10 to 15 years and it will buy an as-yet undetermined amount of bad loans and foreclosed property from lenders that receive Eurozone aid, Economy Minister Luis de Guindos said.

Spanish banks will receive cash, debt or shares in return for toxic assets transferred to the "bad bank", he added.

The latest reform forces banks to strengthen their balance sheets by raising the ratio of rock-solid core capital to 9.0 percent of total assets from 8.0 percent.

The legislation also makes it easier for the government to take control of troubled lenders.

"We are establishing the basis so that there will never be another crisis such as this one ever again," the economy minister said.

The Spanish cabinet was set to approve the banking reform last week but the European Commission asked Madrid for a one-week delay to give it time to analyze the text.

Olli Rehn, the Economics Affairs commissioner, praised the new measures as "an important signal of Spain's determination to comply fully with the requirements and timeframe set out in the Memorandum of Understanding" on Spain's banking bailout.

"The law provides the necessary legal basis to effectively carry out a comprehensive restructuring of those Spanish financial institutions that are in need of external support," Rehn said.

The down side to this is it takes the pressure off the banks to sell at realistic prices and piles the cost onto the Spanish taxpayer who has been told that there will be no net cost over a 15 year period. Beware any politician making such long term promises.