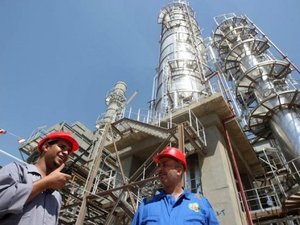 Overall exports averaged 2.565 million barrels per day (bpd), bringing in $8.442 billion in revenues on the back of average oil prices of $106 per barrel, Falah al-Amiri, head of the State Oil Marketing Organization, said.

"The level of exports was the highest in more than 30 years," said ministry spokesman Assem Jihad.

Iraq has proven reserves of 143.1 billion barrels of oil and 3.2 trillion cubic meters of gas, both of which are among the largest in the world.

Crude exports account for the lion's share of government income, and Baghdad is looking to dramatically ramp up both production and sales in the coming years, bringing in much-needed cash to rebuild its conflict-battered economy.