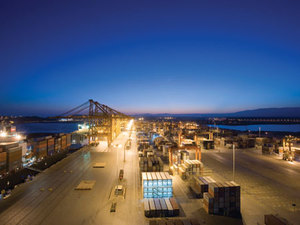 Oil-rich Abu Dhabi began commercial operations on Saturday at its new Khalifa Port in a multi-billion-dollar project to transfer its main container terminal from the 40-year-old port of Mina Zayed.

The new facility, built on reclaimed land five kilometers off the coast of the Gulf emirate, received its first ship from a commercial customer, the 366-meter MSC Bari.

The first phase of the project, now complete, has cost 26.6 billion dirhams ($7.2 billion), the Abu Dhabi Ports Company (ADPC) said in a statement released to coincide with the opening ceremony.

Khalifa Port, which is part of the Kizad industrial zone, now has a capacity of 2.5 million TEUs (containers) a year, with an additional 12 million tons of general cargo, including four million tons a year from the adjacent Emirates Aluminium (EMAL) berth which opened in late 2010.

The size of the island hosting the offshore part of the port is 2.7 square kilometers, equivalent to 400 football pitches.

Its total area, including onshore, is 9.1 square kilometers.

The ultimate aim is to take the annual capacity of the port to 15 million TEU by 2030, ADPC said.

This is more than the amount handled by Dubai's nearby Jebel Ali port, the world's largest man-made harbor, which handled 13 million TEU last year.

"Our plan is to move all our existing container business starting today from Mina Zayed to Khalifa Port," he said.

ADPC's chief insisted that developing Khalifa Port is not aimed at competing with Jebel Ali Port 45 kilometers away, adding that it was aimed at serving Abu Dhabi's needs.

"Jebel Ali is a trans-shipment port... Mina Zayed is a destination port. It (Khalifa Port) will be exactly the same," Douglas said.

"Currently Mina Zayed is a destination port. Ninety-five percent of everything that goes into Mina Zayed stays in Abu Dhabi. When we migrate to Khalifa Port, it will be the same."

Located in the city of Abu Dhabi, Mina Zayed port will continue to handle commercial cargo, but will also concentrate on developing the growing cruise liner business.