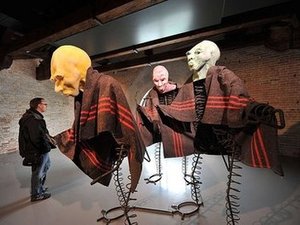 "In Praise of Doubt" is the latest contemporary art exhibition at the Punta della Dogana gallery, a former Venetian Republic Customs House at the center of the lagoon on the Grand Canal, just across from Piazza San Marco.

The 15th-century gallery, with its wooden-beamed ceilings and tall windows looking out over passing gondolas, was transformed after Pinault won a contest in 2007 to create a brand new contemporary art center in the floating city.

The self-made art buff, who owns the Gucci Group -- including Yves Saint Laurent, Bottega Veneta and Alexander McQueen -- as well as Christie’s auction house, has given Venice's Guggenheim modern art museum a run for its money.

In 2007 Pinault called in Japanese architect and former boxer Tadao Ando to renovate the space and unveiled the gallery to great fanfare two years later.

Along with its sister gallery, the Palazzo Grassi -- which Pinault has owned since 2005, the Punta della Dogana draws in around 1,000 visitors a day, nearly matching the prestigious Guggenheim in the popularity stakes.

"We have around 350,000 to 400,000 (people) come through each year. Almost as most as the Guggenheim and markedly more than the Accademia art museum," Martin Bethenod, the galleries' director, told Agence France Presse.

The 74-year old Pinault bought the Grassi -- which had stood empty since its former owner, Fiat's Gianni Agnelli, died -- after an ambitious project to build a museum on the Ile de Seguin outside Paris came to nothing.

Within a year the luxury goods tycoon had transformed the Grand Canal palace into a contemporary museum to house his 2,500 or so artworks, many of which are put on show for six to 18 months at a time in both galleries.

The exhibition stars controversial Italian Maurizio Cattelan's headless taxidermied horse, which hangs in mid air from a wall as if it is trying to leap through the concrete, and Jeff Koons' large red "Hanging Heart".

"Once you do experience acceptance, it takes away any anxiety and stops you judging other people," he told AFP.

Cattelan's stark take on environment and mortality is captured in "All", a white marble sculpture made up of nine draped corpses -- one visibly pregnant -- which dominates one of the gallery's cavernous rooms.

Themes of sexuality and identity are explored in Paul McCarthy's bulbous, leering male head on the body of a naked women, and in David Hammons' haunting ivory wedding gown, suspended in the air in "Forgotten Dream".

Edward Kienholz’s "Roxys", a throwback to a 1940s American brothel, features whores grotesquely assembled from worn and withered everyday objects, waiting for their wartime clients, while a jukebox churns out tunes in the background.

"There is a theory... that creativity died a couple of decades back and that everything that is produced now is a fraud. I find that very depressing and negative," Pinault told AFP ahead of the exhibition opening on April 10.

"There are, and always will be, greatly talented and creative artists in the world," said the blue-eyed mogul, whose investment in contemporary art saw him shoot to the top of ArtReview Magazine's 100 most powerful list in 2006.

"Despite the claims of certain critics, artistic creation is not dead."