US Marks 150th Anniversary of Start of Civil War 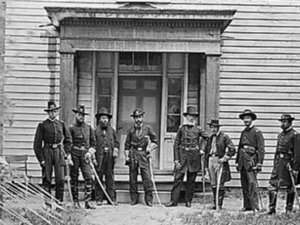 Americans on Tuesday mark the 150th anniversary of the start of the U.S. Civil War, a bloody conflict that historians say still deeply influences the United States.

"The Civil War is one of the most significant events in American history in terms of the way the American nation was defined," said William Link, a historian at the University of Florida.

More than 500,000 people were killed in the deadliest war in US history when North and South battled over states rights and slavery. Fighting began April 12, 1861, with an attack on Fort Sumter in South Carolina.

The country has made significant progress -- electing in 2008 its first black president -- but historians and political scientists say race relations and states rights are still major issues.

"We don't have slavery any more, but I think still in this country when people think of race they think of white people and non-white people, so there's kind of two groups," Link said.

Southern states, forming the Confederacy, sought their independence from the United States -- the Union -- arguing that tariffs imposed by the federal government hurt the Southern economy. They launched the attack on Fort Sumter.

Slavery was still legal in the South, which some historians say was the real reason for the divide.

"The primary goal of the Confederacy was to preserve a slave system," said David Kilroy, historian at Nova Southeastern University in Florida.

President Abraham Lincoln's Emancipation Proclamation in January of 1863 declared freedom for all slaves in the Confederacy, and began a transformation that eventually ended slavery and extended civil and political equality to African-Americans, Kilroy added.

Despite the Union victory in 1865, Southern states decades later still used state-sanctioned laws, like poll taxes, to discriminate against black people. It wasn't until the 1964 Civil Rights Act that racial discrimination was outlawed, and backed up with threat of federal enforcement.

"Barack Obama's election was a watershed moment in the United States' evolution as a multi-racial democracy, a process which has its origins in the Civil War and post-war Reconstruction," Kilroy said.

And even today there are reminders of the old divisions, particularly with states' rights.

Just two years after Obama's election, voters vented their frustration with him and fellow Democrats by putting the Republicans in charge of the House of Representatives. The main sources of their anger were perceived federal mandates like the sweeping health care reform initiative.

"Much of the political rhetoric today is couched in absolute terms, with little or no room left for compromise and moderation," Kilroy said.

"Particularly in the Tea Party movement, there is a strong propensity to portray opposition views as the antithesis of the founding principles of the American republic, something that was common in the Civil War."

Among regular Americans, there is no consensus about the primary cause of the Civil War. The Pew Research Center found that 48 percent of people say the war was about states' rights while 38 percent say it was mainly about slavery.

Elected officials have found that Civil War issues can be political minefields.

In Virginia -- a former Confederate state home to many Civil War battles -- Republican Governor Robert McDonnell, who is white, publicly apologized in 2010 for omitting slavery when he declared "Confederate History Month."

And Mississippi Governor Haley Barbour, a white Republican who is mulling a run for president, made headlines recently when he stated his belief that slavery was the main cause of secession -- not states' rights.

Despite lingering racial issues, new figures from the U.S. Census Bureau show that black Americans are returning to the South, which now has the largest percentage of black people since 1910.

Between 1910 and 1970, huge numbers of African Americans moved to the North or Midwest in search of jobs and to escape segregation.

In South Carolina, where a Confederate flag is not an unusual sight on a lawn or in a car, the black population grew by 9 percent over the past 10 years.

The black population in North Carolina grew by 17 percent.

"We've definitely become more diverse and not just with African Americans," said Jennifer Song, the state demographer for North Carolina, referring also to the growth in Hispanic and Asian populations.

The Civil War has remained a popular topic for filmmakers and authors.

Robert Redford's new film, "The Conspirator," tells the story of Mary Surratt, the boarding house owner who was accused of aiding John Wilkes Booth in his plot to kill Lincoln, who was shot shortly after the war ended.

"This is the most important event in U.S. history," Burns said. "How can it not resonate with Americans everywhere? It defined us a country."