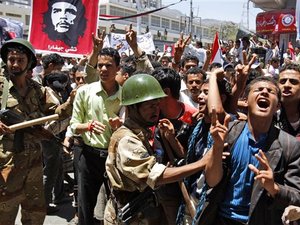 At least seven people were killed in Yemen, including four police who clashed with a dissident army unit, military sources and medics said on Wednesday.

The four policemen died as security forces traded fire with automatic weapons and rocket-propelled grenades in the clash late on Tuesday, he said.

In the south of the country, soldiers on Wednesday shot dead two anti-regime protesters and wounded several others in different sectors of the port city of Aden, medics and witnesses told AFP.

They said the army opened fire as protesters tried to set up roadblocks to enforce a general strike, which demonstrators have vowed to carry out in Aden every Saturday and Wednesday until the fall of President Ali Abdullah Saleh.