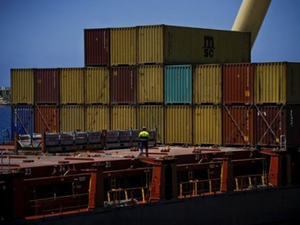 Portugal's economy shrank by 1.2 percent in the second quarter compared to the previous quarter and 3.3 percent on a 12-month basis, final GDP data from the national statistics institute (INE) said Friday.

The data, which INE said was attributable to a decline in internal demand, were in line with gross domestic product estimates made last month.

According to INE, internal demand fell by 7.6 percent on a 12-month basis, with investment suffering a 18.7 percent decline.

Exports, one of the few bright lights in the Portuguese economy, continued to progress but at a slower pace, the institute said. On a 12-month basis, exports grew 4.3 percent in the second quarter, which was sharply lower than the 7.9 percent increase posted in the previous three-month period.

The data comes as auditors from the so-called troika of creditors -- the European Union, International Monetary Fund and European Central Bank -- monitor Portugal's implementation of spending cuts and economic reforms under a rescue package worth 78 billion euros ($98 billion).

The cuts and problems in the rest of the Eurozone have caused Portugal's economy to contract more than expected and the government looks increasingly unlikely to meet the target of reducing the public deficit to 4.5 percent of GDP this year.