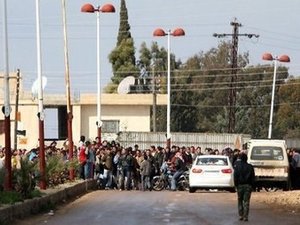 "It was armed men who prevented ambulances carrying 34 wounded policemen to hospital in Daraa on April 8," the statement continued, referring to the southern flashpoint which has been the epicenter of anti-regime demonstration.

The statement echoed a previous ministry communiqué on Sunday in which it said: "Armed gangs blocked the road in Banias (in the northwest) to prevent ambulances from getting to military wounded and taking them to hospital."

"In addition, the armed gang opened fire on the medical teams," the statement added.

The group said the "inhumane" and "illegal" blocking of access to medical treatment occurred in the southern town of Daraa, the center of a wave of protests against President Bashar Assad, and Harasta near Damascus.

"To deprive wounded people of critical and perhaps life-saving medical treatment is both inhumane and illegal."

The rights group said it had interviewed doctors as well as injured protesters and their relatives in Daraa and Harasta and the town of Douma.