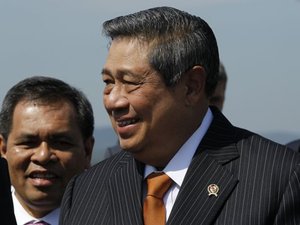 Susilo Bambang Yudhoyono issued the call during a speech to global business executives in the Russian port of Vladivostok ahead of an annual Asia Pacific economic summit that he will host next year.

The necessary investments will go toward projects relating to infrastructure development, food, energy, and science and technology, Yudhoyono said.

"In the years and decades ahead, we are embarking on a massive development initiative," said Yudhoyono, who was to meet with other leaders from the 21-member Asia Pacific Economic Cooperation (APEC) bloc for a two-day summit opening Saturday.

The plan, announced last year, is aimed at spurring development in key sectors up to the year 2025.

"We project that this master plan will require some $500 billion of domestic and foreign investment," he said.

Yudhoyono urged investors to take a look at Indonesia, Southeast Asia's biggest nation with a population of 240 million people.

"On one hand, Indonesia will benefit from your investments and collaboration. On the other hand, your investment and returns will also grow," the retired army general said.

Foreign direct investments in Indonesia -- which boasts rich natural resources -- are expected to reach $20 billion this year, up by a third from 2011, he said.

He cited a recent credit ratings upgrade for Indonesia as among the reasons for investors to come in.

"This is a remarkable achievement in the midst of the global economic slowdown. Our economy is now the 15th largest in the world, with more than $1.0 trillion GDP by purchasing power parity," he added.