Greece Called on to Produce Results as Auditors Arrive 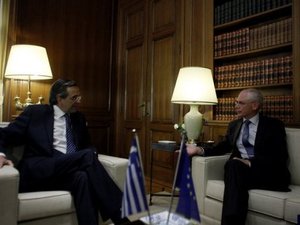 EU President Herman Van Rompuy warned Greece Friday that it needs to produce results as bailout auditors arrived on a mission that will determine whether Athens gets extra time to make spending cuts in return for badly needed loans.

Amid growing exasperation from Greeks about having to accept cuts upon cuts as they struggle through a fifth year of recession, Van Rompuy warned that Greece must deliver on promised fiscal and reform results to obtain further support.

If "Greece stays fully committed to these objectives and delivers results, European institutions and even every state will remain committed" to helping Greece, he said.

A favorable assessment from the auditors from the so-called troika of creditors -- the IMF, EU and European Central Bank -- is necessary for the release of a 31.5 billion euro ($39.9 billion) loan installment.

They review Greece's efforts to cut its deficit and adopt reforms needed to help improve its economic competitiveness as agreed as part of its 130-billion-euro bailout package.

The troika has been demanding Athens make up for lost time after delays brought on by back-to-back elections that caused a two-month political deadlock.

But Greece has been pleading for "breathing space" to carry out the billions of euros in agreed cuts, arguing that reducing spending too much too fast will only further depress the economy.

A deeper than expected recession has made it even harder to meet the agreed targets.

"The resistance of Greeks has reached its limit, which means we need a recovery as soon as possible," Prime Minister Antonis Samaras said after meeting Van Rompuy.

Samaras said he stressed to Van Rompuy "the need to unlock in time the next installment" of bailout loans, with Greece expected to default within months if it doesn't get the money.

Van Rompuy noted that Greek people were being asked to make difficult sacrifices and praised their "courageous choices in favor of the euro and their place in the euro".

He added: "Prime Minister Samaras has confirmed to me that his government that his coalition behind it, are firmly committed to press ahead to this consolidation and important reform."

However, amid the cascade of bleak data, the coalition government has not finalized the program of cuts necessary to receive the next installment of bailout loans.

Finance Minister Yannis Stournaras would likely meet the chief troika auditors on Sunday afternoon, a source in his ministry said, and present what the government has so far prepared for 11.5 billion euros in savings in 2013 and 2014.

Samaras is to meet the leaders of the parties in his coalition government that night, followed by a meeting with the troika on Monday morning.

Demonstrators were expected to heap further pressure on the government on Saturday, with the two main unions calling a protest in Greece's second biggest city Thessaloniki against further cuts.

The measures reportedly include a 3.5-billion-euro slash to pensions, health cuts worth 1.47 billion euros and a 517-million-euro reduction to defense.

Key state staff paid under so-called 'special salary schemes' -- a group that includes police, firemen, clerics, diplomats, judges and the military -- are also facing an average pay cut of 12 percent, according to reports.

Samaras has promised that this will be the last round of cuts but Greeks on all sides are expressing outrage at any further austerity, and there have been signs of strains in Samaras' ruling coalition.

"It is certain that the measures being prepared will test the social cohesion and stability of the coalition government... but they are absolutely necessary in order to obtain financing for Greece from international lenders," said Platon Monokroussos, chief economist of Eurobank.

Hospital doctors and judges took to the streets this week, and security forces also demonstrated on Thursday evening against reported salary cuts.