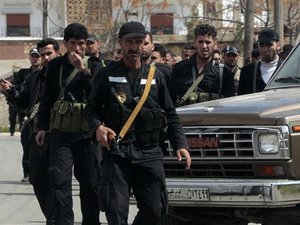 Thousands of women staged a sit-in Wednesday on a main highway in northeastern Syria to demand the release of hundreds of people arrested in protest towns in the region, a rights activist said.

"More than 5,000 women are gathered on the main road linking the towns of Tartus and Banias to demand the release of hundreds of people arrested yesterday in Baida by security forces," Rami Abdel Rahman told Agence France Presse.

"Dozens of people were arrested" in the nearby flashpoint town of Banias, said Abdel Rahman, who was speaking by telephone from London where his organization, the Syrian Observatory for Human Rights, is based.

One witness said gunfire on Baida was "intense like rain" while another said that Banias was "surrounded by tanks" and "like a prison" with no one able to go in or out of the town.

The army has kept a stranglehold on Banias since Sunday, when regime agents opened fired on residents, particularly those in mosques, killing four people and wounding 17, according to witnesses.

The official SANA news agency had said nine soldiers; including two officers were killed on Sunday when their patrol was ambushed outside Banias.

Abdel Rahman said that Syrian officials were expected to visit Banias on Wednesday to meet residents and "listen to their demands."

Syria has been swept by deadly pro-reform protests since mid-March.

A human rights activist told AFP that the crackdown on Banias was "probably aimed at arresting" Anas al-Shuhri, one of the leaders of the pro-democracy protests.

Syrian President Bashar al-Assad has promised to launch reforms but his regime has put down the protests with deadly force, triggering international condemnation.

On Tuesday the White House condemned the mounting crackdown on dissent in Syria.

"The escalating repression by the Syrian government is outrageous, and the United States strongly condemns the continued efforts to suppress peaceful protesters," press secretary Jay Carney said in a statement.