Lufthansa Flights Back To Normal after Deal 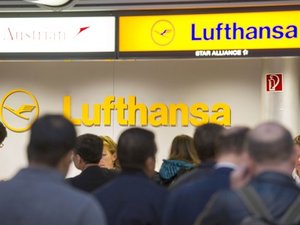 Lufthansa services were mainly back to normal Saturday after a 24-hour staff walkout that grounded half the airline's flights in Germany ended with agreement to call in a mediator.

In a key concession in talks with unions Friday as cabin crew struck, Europe's biggest airline also agreed not to employ cheap contract workers in Berlin.

Until the mediator has reached a decision, expected before the signing of new wage agreements Wednesday, there will be no more walkouts from Saturday, Lufthansa said late Friday.

The strike that began at midnight (2200 GMT) Thursday affected more than 100,000 passengers, with around half the airline's 1,800 daily flights cancelled, it also said.

A spokesman told Agence France Presse Saturday that a normal schedule had been prepared for the day, though some 15 flights had been cancelled earlier because of the knock-on effects of the strike.

The 24-hour stoppage at the airports of Frankfurt, Berlin, Hamburg, Munich, Duesseldorf and Stuttgart was called as unions stepped up pressure in their pay dispute.

Other shorter walkouts of eight hours last week and earlier this week had grounded hundreds of flights and affected thousands of passengers.

The UFO union -- which represents some two-thirds of Lufthansa's 18,000 cabin crew -- is seeking a five-percent pay increase backdated to April after three years of wage freezes.

Lufthansa has said it is ready to increase wages by 3.5 percent.

A 2009 strike by cabin crew cost Lufthansa tens of millions of euros (dollars).